What is Danish cord?

Danish cord, know as ‘papirsnor’ in the Danish language, is a weaving material that has been used for designer furniture since the mid-20th century. It is used to weave chair seats and backrests, primarily, although more recently designers have been using it more creatively for other applications.

What is Danish cord made from?

Danish cord is made of paper. For this reason, it is also known as Danish paper cord. Long stripes of flat papers are twisted to form a rope and then are set into coils. It is a natural and sustainable product that last a long time due to its inherent resistance.

Where does it originate from?

It originates from mid-century furniture design in Denmark. Furniture designers such as Borge Mogensen, Hans Wegner, Finn Juhl, N.O. Moller and many more. Iconic designs such as the Wegner’s CH24 wishbone chair and Niels Otto Moller’s chair use Danish cord up to this day.

During the second world war, weaving materials such as rattan became scarce. A new material was needed. Enters the Danish cord.

Here some of those timeless creations: 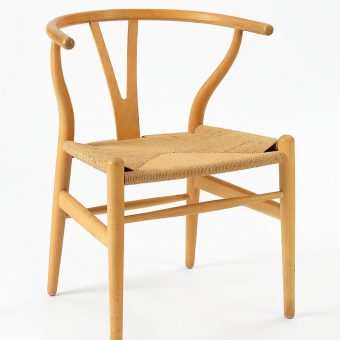 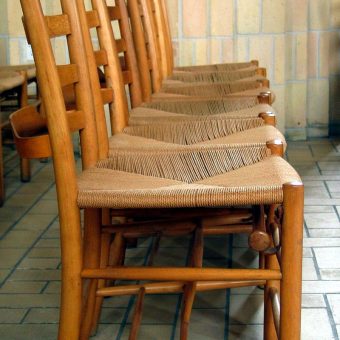 Yes. Danish cord of good quality would last for a generation. The paper cord itself is very strong and once woven it is one of the most durable materials for chair seats and backrests. Good quality cord also comes with a layer of protective wax to prevent stains.

How is it used?

Danish cord is typically used as an alternative to upholstering. The cord is weaved in patterns such as the ‘basket weaving’ on structure such as a chair. This is the classic pattern found in many Danish design classics such as Hans Wegner’s CH23 chair and the Møller chair. The woven envelope pattern is the one found in Hans Wegner’s CH24 chair, also known as the Wishbone chair.

The weaving technique is simple yet intricate, making it difficult to replicate by machines. This means all Danish cord weaving is done by hand. You will find the process both mindful and fun.

Here are some tutorials for those that want to get started weaving with Danish cord or simply as an interesting and relaxing watch:

Weaving with Danish cord and no nails

Skip back to main navigation